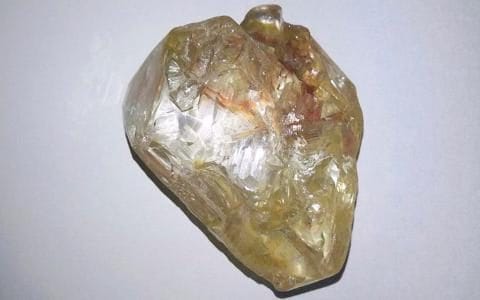 Today it was reported “An African church minister who supplements his meagre stipend by scrabbling for minerals in the artisanal mines of eastern Sierra Leone has discovered one of the largest diamonds ever found.

The 709-carat stone was extracted this week by Emmanuel Momoh, a pastor in one of the myriad churches that ministers to the mining communities of Kono district, the diamond centre that became the crucible of Sierra Leone’s blood-soaked civil war.

It is believed to be the 13th largest uncut diamond ever to be pulled from the ground, industry analysts said.

The stone is to be auctioned, the Sierra Leonean government announced yesterday, although its value cannot be determined until its quality is assessed. An 813-carat diamond was sold at closed auction in London last month for £51m.

Although big, the diamond is still dwarfed by the 3,106-carat Cullinan Diamond discovered in South Africa in 1905 and never matched since. It was later cut into several gems, two of which have been set into the Crown Jewels.”

MNP Gems Ltd. is a family run wholesale business who have been operating for over 20 years and were incorporated in 2006.

We specialise in manufacturing and supplying the best quality 18ct white and yellow gold diamond and gem jewellery.

Located in the Jewellery Quarter, Birmingham.